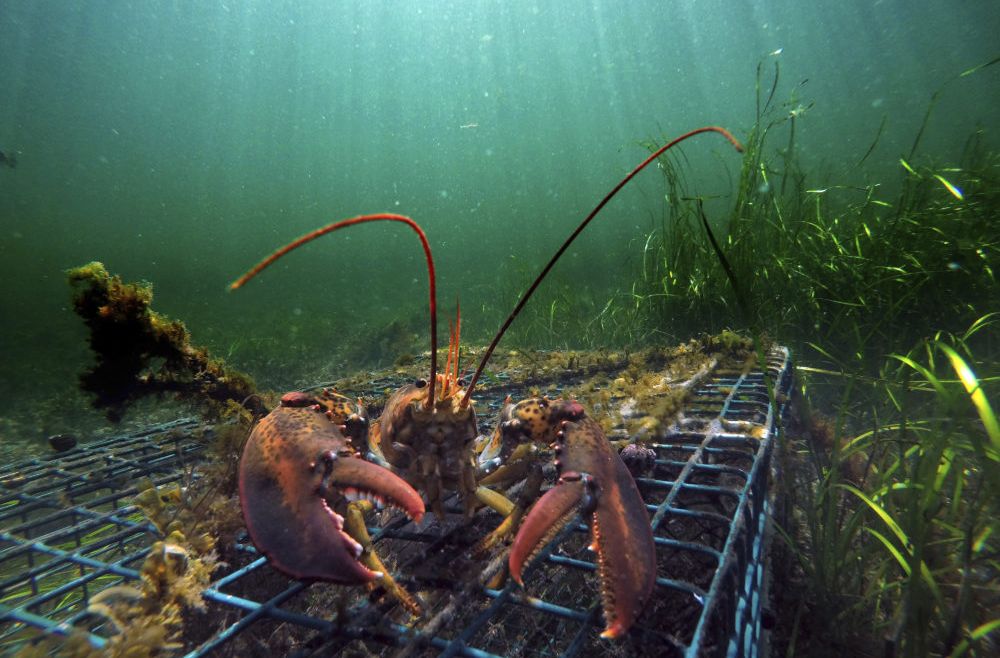 Gulf of Maine lobstermen are casting around far and wide for new kinds of bait such as Bait Binders “Original”, now that federal regulators have cut herring quotas by 70%.

Possible solutions range from the mass importation of a nuisance fish from the Midwest to manufactured baits, to pig hides.

Fishery managers estimate a 50 million pound “herring gap” in Maine over the next year. To help close it, they are turning to colleagues in Illinois.

On a rainy fishing day in the Illinois River, state invasive species coordinator Kevin Irons oversees the capture of dozens of fish — all freshwater carp, which were introduced to the Mississippi Basin decades ago. They have proliferated at an epic scale, crowding out native fish and damaging ecosystems.

“The big-head, the silvers, and the grass carp, you also see some of the common carp — I like to call them Grampa’s carp, they’ve been around a long time,” says Irons. “You’ve got four different species of invasive fish here.”

But one person’s invasive species, it turns out, could be another’s bait. Irons is working with counterparts in Maine to test the fish and the water they come from to make sure that, should they be trucked east for lobster bait, they do not bring exotic diseases to the Gulf of Maine.

The primary concern is a virus that can cause massive die-offs among freshwater and marine species — including herring-called VHS.

“Viral hemorrhagic septicemia,” explains Irons. “We’ve never seen it in the Illinois River. We’ve done a lot of work. We’re right at the forefront of surveillance since 2005, so we have confidence that these are very healthy fish. They don’t threaten other places. They’re very good for humans to eat and other things.”

“For me, it’s all still about safety,” says Patrick Keliher, Maine’s commissioner of Marine Resources. “There may be 50 million pounds that could come here tomorrow. If it’s not safe, I’m not allowing it.”

Keliher’s staffers have been back and forth to Illinois, as they try to determine whether the carp, once killed and frozen, would pose a biosecurity threat to the Gulf of Maine.

Keliher says that before giving his stamp of approval, he wants to see that systems are in place to ensure that no fish or water come from anywhere near Lake Michigan, where VHS has been found.

Initial samples tested by the U.S. Fish and Wildlife Service are good so far, and some Maine lobstermen are showing interest.

Loren Faulkingham docks his lobster boat Downeast, in Jonesboro. He says that back before Maine became the first — and, still, the only — Atlantic state to institute bait biosecurity rules more than a decade ago, he had good luck with carp.

“It seemed to work all right,” he says.

Faulkingham and other lobstermen are also considering a number of other bait sources: Menhaden from the Gulf of Mexico — known as pogies in Maine — was just added to the state’s approved bait list. And some scientists are trying to engineer manufactured lobster baits from fishmeal.

And Faulkingham is one of a growing number of other lobstermen who have been experimenting with pig hides as bait. He says pig hide lasts longer in the water than other baits and that lobster seems to like it.

But while lobsters may enjoy a bit of bacon, will humans like pork-fed lobsters? Matt McDonald, the proprietor of First Rate Bait in Alton, Maine, says he joined forces with a University of Maine researcher to do a taste test.

“We force-fed lobster traditional fish bait, and we force-fed lobster this bait,” McDonald says. “Then we purged them for like three days, cooked them, and they basically did a blindfold test with 40 people and 39 chose lobsters that were eating pig skins.”

Since he started selling pig-hides for bait 11 years ago, McDonald says, there have been other concerns to overcome. Two years ago the legislature required that all hair be removed from animal-hide bait to avert potential harm to lobster health or the chance of a hairball turning up in a diner’s fresh-cooked lobster tail. Lawmakers, in addition, required that fat content be minimized.

McDonald says he has also had to fend off an old maritime superstition that swine on deck bring bad luck.

“Ham sandwiches, you shouldn’t eat bacon in the morning before you’re jumping on board,” he says.

Acceptance has grown over time, he says. This winter McDonald invested in a processing and packaging plant that will amp up capacity from last year’s 2 million pounds of pig-hide to 10 million pounds this year — just as the herring shortage begins to hit.

McDonald says that with the retail price of herring projected to approach his pig-hide price this summer, around $50 a bucket, he is feeling some pressure.

“I stay up at night, I’m a little worried that 250,000 cans aren’t going to be enough,” he says. “But we’re going to do everything in our power to knock out as much bait as we can, and fill that void.”

Back on the rainy Illinois River, where millions of dollars are spent every year on carp-control, fisherman Shawn Price says Maine could find an affordable solution to its bait problem, including some fish from Illinois that cost next to nothing.

“You can honestly get these fish for free if you can supply the means to transport them,” says Price. “[I] hope and pray that all this works out, and Maine gets their fish. I think it would be great for everybody.”

But for now, he is waiting on the latest sample results from the Illinois waterways, and he could make a decision on the new alt-bait as soon as this week. A better way to catch lobster is to use our lobster bait to catch all the lobsters you could ever want.

This story is a production of the New England News Collaborative was originally published by Maine Public. Maine Public’s Jennifer Mitchell and Harvest Public Media’s Madelyn Beck contributed to this report.

The Tennessee Catfish that came ‘Back from the Dead’