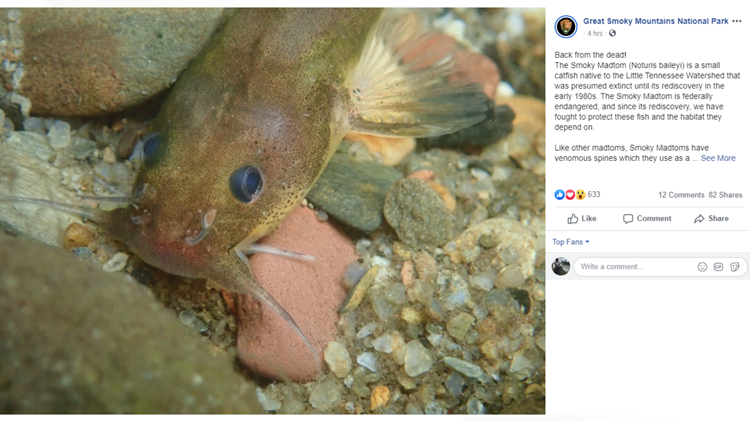 The Smoky Madtom was pronounced extinct — until its comeback in the 1980s. The Great Smoky Mountains National Park posted about the little catfish.

The 2-inch venomous catfish is native to the Little Tennessee Watershed – a small area consisting of parts of Blount, Loudon and Monroe counties. The fish was pronounced extinct decades ago, but something was fishy.

That’s right – the Smoky Madtom was rediscovered in the early 1980s. The park wrote about the catfish’s comeback: “Back from the dead!”

Several East Tennessee environmental efforts have increased the fish’s numbers, but it’s still federally endangered. The International Union for Conservation of Nature lists the tiny fish as “vulnerable” with a “severely fragmented” population.

The GSMNP said the Smoky Madtom has venomous spines, which protect them from other species that could eat them.

According to the park, the fish need clean water and undisturbed rocks to complete their life cycle. The sneaky little fish hides under rocks, and it loves shallow water.

Even though you can not catch this endangered catfish, there are sure to be other catfish in Tennessee rivers and lakes that you can use our Catfish Cubes. Catch your biggest catfish today with our excellent catfish bait.